Updated as of October 27th, 2017. I’ve done some more exploring and I’ve made a few phone calls and I’ve got all the current info on analog photobooths, which sadly, will likely be gone by the end of the year. The only analog photobooth left in the Montreal metro system is at Place-des-Arts. Last I went was on October 16th, to celebrate my 32nd birthday. The machine flashed and made its usual sounds, but after fifteen minutes of waiting for what should have taken three minutes, I left without my strip. The next day, I phoned the service number in the machine and the operator confirmed that the booth had been repaired late that night, and that my pictures were found trapped in the machine – they kindly mailed my mangled photos to my apartment (pictured below). So nice of them! Several friends have used the photobooth since, and confirmed that it is finicky.

There is also an analog photobooth at North Star Machines à Piastres (3908 St-Laurent), which prints a slightly wider strip, and takes tokens, available at the bar. Have fun!

Originally written in February 2016. Every year, I do a Fun-A-Day project to pass the time and have something to look forward to during the winter. For 2016, I decided to track as many photobooths in Montreal as I could – which turned into a bigger project of visiting every metro station in the city, and poking around malls in the early mornings before there’s much of a crowd. In the end, I tracked the remaining analog booths (which are rapidly disappearing – at least three gone in the months before I began the project), and the various digital booths that exist. The latest issue of Critical Breakfast is a tiny little zine about my love of photobooths, and about winter survival in general, and contains a fold-out map of the Montreal metro system that shows every photobooth I found, a list of books I read while riding the metro, and a few fun resources. Recommended if you live in Montreal, or are planning on visiting.

If you’re local, I’ll also trade for your own zine, a mixtape, or a non-alcoholic drink. 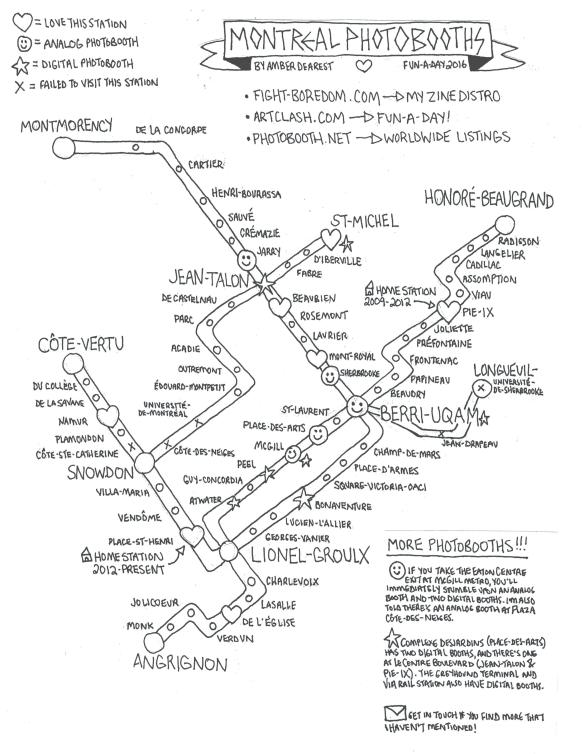